Girl, Get Some Footnotes: Rachel Hollis, Hustle, and Plagiarism Problems 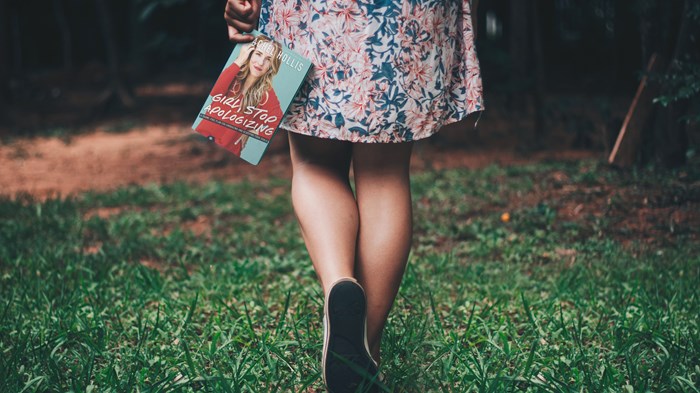 Something funny happened after I finished the new book from multimedia business mogul Rachel Hollis, best known for the massive 2018 bestseller Girl, Wash Your Face. After marking up my copy with marginalia, I nibbled at the bait: I pulled a notebook out of my desk, wrote “GOALS” on the front, and made a to-do list of accomplishments to focus on for 2019. And, wow, it felt good.

At this point, a tiny blonde woman appeared on my shoulder and said, “You go, girl!” before inviting me to attend the next RISE conference, which, okay, is sold out, but I could definitely be added to the email newsletter list and maybe get some VIP swag. I was a momentary convert to the religion of self-help—that durable American belief that with enough hard work and positive thinking, anyone can be the captain of her own destiny.

As Hollis writes in Girl, Stop Apologizing: A Shame-Free Plan for Embracing and Achieving Your Goals (HarperCollins Leadership), “you can be whoever you want to be and achieve whatever you want to achieve.” It is Hollis’s ode to hustle—to “the desire to work as hard as you can to chase down a goal.” In three parts, with lots of practical tips and personal stories, Hollis names excuses to let go of, behaviors to adopt, and skills to acquire in order for women to get everything they want out of life.

According to the book’s reassurances, it doesn’t really matter what you want in life as long as you’re willing to work for it. “Embracing the idea that you can want things for yourself even if nobody else understands the whys behind them is the most freeing and powerful feeling in the world,” Hollis writes. As such, the book offers a breezy relativism in which no one can tell someone else what is right or best. “When other people’s expectations start to dictate your actions, you’re lost,” says Hollis.

Many women today hear the message that their ambition is suspect, that mothers who pursue much outside of motherhood are being selfish, and that submission is the core of Christian womanhood. So it’s no wonder why Hollis’s self-empowerment message is resonating. And is it ever: Six months after publication, Girl Wash Your Face had sold 800,000 copies; the next RISE conference, held at the 99,000-square-foot Minneapolis Convention Center this summer, is sold out; and even before it was released, Girl, Stop Apologizing had 600 Goodreads ratings, most of them five stars.

Girl, Stop Apologizing is like Lean In if Sheryl Sandberg spent several pages discussing her breast augmentation surgery and quoting Jay-Z. But unlike Lean In, in which Sandberg shares many personal failures and hard lessons learned, Hollis’s story is a series of unmitigated successes. (In fact, there aren’t any stories of other women in the book.) To be sure, Hollis recalls moments of disappointment, like when Girl Wash Your Face initially didn’t appear on the New York Times bestseller list or her battle with mommy guilt as her business took off. But one way or another, all of Hollis’s stories serve to show that her hard work worked. It’s as if a friend sat you down over a glass of wine, looked you in the eyes, and said, “Girl, I did it—why can’t you?”

Even though it spurred me to clarify some long-term goals, Girl, Stop Apologizing exhausted me before I had the chance to work on them. I thought about recent research that shows spikes in anxiety among teenage girls and the crushing perfectionism that many professional women bring to the office. As someone who wrote a book about women’s work and ambition, I’d love for more women to pursue excellence in their daily work. Women are held back by unfair double standards and false guilt.

I lament the cultural forces that make so many women need self-help tools in the first place. But personal excellence is humanly impossible without rhythms of rest—without daily routines where we cease striving to simply delight in being God’s image bearers rather than doing things to please God and others.

True excellence is also impossible within a theological framework that overemphasizes self-determination. Throughout the book, Hollis seems to veer into prosperity gospel theology by communicating that if you simply work hard enough, you’ll reap the financial, professional, and physical rewards that you deserve.

Hustle is an idol if it leads you to cut ethical corners in order to stand out in a competitive world. Unfortunately, Girl, Stop Apologizing is full of mantras and techniques that originate with others but that Hollis (or a ghostwriter) presents as her own. For someone whose enterprise is based on self-sovereignty and personal accomplishment, she is deeply reliant on the insights of others but doesn’t give credit where it’s due.

Some examples—such as, “If you want to take the island, burn the boats” (p. 96)—are less egregious because they are embedded in the cultural lexicon and lack a clear original source. Others are contemporary, Instagrammable sayings that can be more easily traced to an original author. These are the sayings that Buzzfeed recently highlighted and that plagiarism watchdog Digital Content Police has flagged. They include “Stop comparing your beginning with my middle” (p. 60); “Someone else’s opinion of you is none of your business” (p. 69); and “I love Jesus but I cuss a little” (p. 37). I traced the latter back to Nadia Bolz-Weber, who was perhaps adding her own spin to a quip from the late comedian Gladys Hardy.

The most alarming examples of plagiarism in the book are actually concepts that Hollis claims as her own that originate with someone else.

The first one is what Hollis calls “10, 10, 1.” The idea is that you “envision” what you want your life to look like in 10 years, with really specific details. Then Hollis suggests that you list out 10 dreams based on whatever you envision. Finally, you come up with one goal that will help you get there.

Even though the phrase appears to be her own, the idea of envisioning your life in 10 years is a writing exercise by designer Debbie Millman that she gives her students and has shared on the Tim Ferriss Show podcast. Millman calls it “Your 10-Year Plan for a Remarkable Life.” There is no attribution to Millman, and the phrasing in Hollis’s book is very similar to what’s in the podcast transcript. For example, in coaching a participant to imagine her life in 10 years, Millman writes, “Dream big, dream without any fear. … What kind of clothes do you wear?” Hollis writes, “Dream big. Don’t put any restriction on it. … What kind of clothes does she wear?” The stylistic and conceptual similarities are striking.

The second example is the definition Hollis offers as a habit: “A habit is a series of three things: A cue, an action, a reward.” What she’s describing is “The Habit Loop” from Charles Duhigg (The Power of Habit). But on page 132, Hollis presents it as her own idea without attribution.

Despite all this, I’m heartened to think of the women who will take Hollis’s encouragement and go on to accomplish great things for God. Indeed, the Proverbs 31 woman is the biblical exemplar of feminine hustle, and Christians are told to make “the most of every opportunity, because the days are evil” (Eph. 5:16), which is like the biblical version of the Eminem lyric “You only get one shot.” But a distinctly redeemed hustle does not let even good, godly ends justify unethical means. It’s an irony that Hollis is telling millions of women to work hard, since she’s capitalizing on the intellectual labor of others. At the least, Hollis’s tendency to borrow ideas without attribution might remind readers that none of us should try to hustle alone.