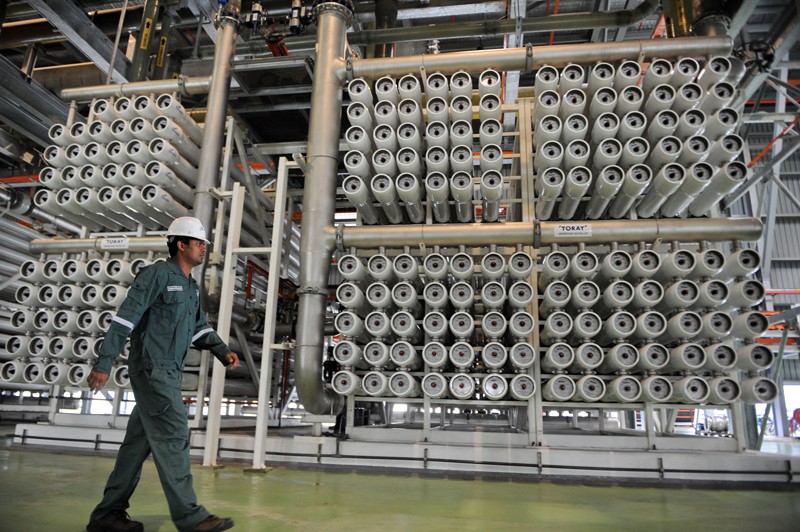 There is no room for squeamishness in the face of the world’s growing water shortage — three steps could vastly improve the image of reused water for drinking.

Drinkable water is becoming increasingly scarce. Population growth, pollution and climate change mean that more cities are being forced to search for unconventional water sources . In a growing number of places, drinking highly treated municipal wastewater, called ‘reused water’, has become the best option — and, in some cases, the only one (see ‘What is reused water?’).

But anxieties about reused water, often heightened by sensational media coverage, have prevented several projects from going ahead. Some people are concerned that reused water will contain more pathogens and chemicals than drinking water sourced from lakes or rivers. Others are simply disgusted by the idea of consuming water that has passed through toilets and drains before being treated.

Around two billion people now live in countries with ‘high water scarcity’ — mainly in northern Africa and western, central and southern Asia . With the global population predicted to increase from 7.7 billion today to 10 billion in 2050 — an estimated 70% of whom will live in urban areas — the demand for safe drinking water is set to rise drastically. According to a 2019 United Nations assessment, water demand in general is likely to increase by 20% to 30% between now and 2050 .

What is reused water?

In middle- and high-income countries, domestic (municipal) wastewater — from houses, shops and businesses, but not from industries — is generally collected, treated in sewage plants and discharged into rivers, lakes and other natural water bodies. The ‘raw water’ is then collected, treated again and used by towns and cities downstream for drinking, agriculture, landscape irrigation or industrial processes.

An alternative strategy is to treat municipal wastewater more rigorously so that it can be used for drinking. After it goes through the sewage plant, it is treated in a second plant (and sometimes a third) using advanced chemical, biological and physical treatments. The water is then fed directly into the drinking supply system or into the natural system (rivers, lakes, aquifers or reservoirs). In the latter scenario, water is subsequently extracted from the natural system, treated again and then supplied to people for drinking or other uses. In both cases, the resulting water is termed reused .

In many places, discharges of wastewater treated in the usual way (so just once) are making up an increasing proportion of river flow . Yet authorities still consider such rivers ‘natural sources of freshwater’. Because downstream treatment methods might not be adapted to the actual quality of the raw water, this is increasingly posing a health risk. Thus, treating wastewater to higher standards in a controlled environment and reusing it for specific purposes can make more sense, for both economic and health reasons.

Thus, conserving water is paramount. Supply infrastructure needs to be improved and better managed, including through the use of smart sensors and other technologies. Economic instruments, such as appropriate pricing, can boost efficient usage. Legislation needs to be implemented to lessen pollution. And all sectors — public and private — need to be educated about the importance of saving water, as does society more broadly.

High on the list should be efforts to investigate the benefits and risks of drinking reused water, including ways to make it more acceptable to consumers.

Opposition from citizens has stalled several projects aimed at providing people with reused drinking water over the past two decades.

In 2000, the Los Angeles Daily News ran an article titled ‘Tapping toilet water’ about the East Valley Water Recycling project that had begun in the San Fernando Valley in Los Angeles, California, in 1995. People in the region were worried that the water, which they thought would be supplied only to those living in low-income areas, would be unsafe. The project was politicized by mayoral candidates, and the Los Angeles Department of Water and Power, which had proposed the project, eventually decided not to implement it. Since then, the reused water has been used only in irrigation and industry .

In Queensland in Australia, residents successfully opposed a reuse project in Toowoomba in 2006 and the Western Corridor Recycled Water Scheme in southeastern Queensland in 2009, even while the country was experiencing the most severe drought since records began.

In Toowoomba, 62% of around 95,000 people voted against the project, largely because of safety concerns and fears that it would harm industries including tourism, food processing and property sales . The Western Corridor Recycled Water Scheme cost Aus$2.4 billion (US$1.6 billion) to construct and aimed to produce up to 230,000 cubic metres of water per day to cover around 30% of southeastern Queensland’s water supply needs. But in 2009, following political pressure and a break in the drought, it was decided that the scheme would produce drinkable reused water only when the levels of the reservoir (where the reused water would be stored) fell below 40% of full capacity6.

Public scepticism over water safety is not completely unwarranted. In the United States and Canada, for example, there are still communities that lack access to safe drinking water — predominantly among low-income and minority ethnic populations . In several cases, drinking water has been shown to be unsafe for the population, such as in Flint, Michigan, in 2014, and in several cities in Canada this year. In all of these instances, the water was found to contain higher concentrations of lead than those deemed safe by the regulatory authorities. In October last year, testing revealed that nearly 300 drinking-water wells and other water sources in California contain traces of chemicals known as PFASs (per- and poly-fluoroalkyl substances) that have been linked to certain cancers and other health problems.

Three steps would improve the image of reused water.

Do more research. Wastewater contains hundreds of known chemical and pathogenic contaminants that, if not treated properly, can cause serious acute and chronic diseases, such as cholera or typhoid. Also, new chemicals are continually being introduced to the market, and new strains of bacteria and viruses discovered. Investigators at universities and those working for water-utility companies must study, quantify and effectively mitigate any emerging risks, and must keep appraising the overall benefits and costs of reused water on both human and environmental health.

Especially as technologies for detection become more sensitive, more affordable and widely available, the presence of pathogens and chemicals must be continuously monitored (by daily or even more frequent testing ) to protect the public from problems that might emerge . Chronic risks from long-term exposure to low levels of toxic chemical substances are just as important to track as acute risks resulting from a one-off exposure .

In middle- and high-income countries, drinking water, whether or not it is reused water, must meet national, regional and local health standards (or whichever apply) for pathogens, chemicals and any other types of contaminant8. So far, water agencies in cities using reused water have been able to meet these standards — through the use of multiple barrier-treatment steps from chemical to microbial, through real-time monitoring of microbes and chemicals, and by using various risk-management strategies throughout treatment and distribution.

Community engagement is not — and must never be perceived to be — a means to convince the public that certain projects should go ahead. Rather, it should be about setting up platforms, so that people’s concerns can be heard and addressed early on, even if that means modifying plans.

Some successful projects can offer a model. In the 1990s, for instance, the city of San Diego in California planned a water reuse project to reduce its dependence on water transfers from the Colorado River and other sources. The project was initially supported by the public. But that support fell away for various reasons, including inconsistencies in the information provided by expert panels on the safety of recycled wastewater. Following the use of terms in the media such as ‘toilet to tap’ and ‘sewerage beverage’, and claims that the reused water would be supplied only to low-income communities, resistance was such that the city council converted the project to a non-drinkable scheme in 1999.

Yet San Diego still needed more drinking water. So in 2004, the company Public Utilities decided to develop more-comprehensive strategies for public outreach and education. Among the suite of approaches deployed were an online and telephone survey, research involving focus groups, opportunities for city staff to discuss the project with San Diego voluntary service organizations and others, and a dedicated website providing information.

Implement projects where need is great. Competent water-utility companies should start implementing reuse projects in places where the need is greatest. They will need to have sufficient knowledge, technical know-how, staffing levels and financial capacity, and be operating in cities where there are strict water-quality regulations. Once such schemes have been proved safe and effective in places where the stakes are high, others will be more likely to support similar projects in their own communities.

The key to these strategies working is the continuous involvement of all stakeholders — from city mayors to national governments, from businesses and local health and medical boards to community and environmental groups, religious leaders and the media.

At least three important economic centres — Singapore, Windhoek in Namibia and Orange County in California — would not have progressed to where they are today without reused drinking water (see ‘Three successes’). In fact, without these reuse projects, the strict water rations that were likely to result could have had severe impacts on socio-economic development. Moreover, reused water can benefit streams, rivers, lakes, wetlands and aquifers, in part because the excess water from such projects that is returned to natural systems is of better quality than standard treated wastewater.

Located in an arid to semi-arid environment with little access to surface water sources, Windhoek was the first city to create a drinking-water supply from reused water in 1968. The Goreangab Water Reclamation Plant currently produces around 24% of Windhoek’s drinking water (21,000 cubic metres per day) . During the 2014–16 drought, supplies from nearby reservoirs could meet only 10% of demand, instead of the expected 75%. Reused water from Goreangab then contributed up to 30% of the city’s total water supply.

Operational since 2008, the Orange County Groundwater Replenishment System has become the largest reuse facility in the world. It produces 379,000 m3 of drinkable water per day. The project is widely accepted in part because the utility company, the Orange County Water District, prioritized public information and engagement from the start.

Singapore spent decades planning a water reuse scheme now called NEWater. By the time the project was launched in 2003, comprehensive communication and education efforts on long-term safety and reliability issues, involving the government and other decision-makers, had already been established. Today, NEWater supplies about 40% of Singapore’s drinkable and non-drinkable water. If all goes to plan, by 2060, it will meet 55% of the city’s water demands . Most people in Singapore are aware that their island city state is short of water, being too small to store the rainfall it receives. And they appreciate the importance of NEWater. On each Singapore National Day (9 August), thousands of people who attend the celebrations are given bottles of NEWater, which they drink without qualms.